Bling up my hearing aids please! 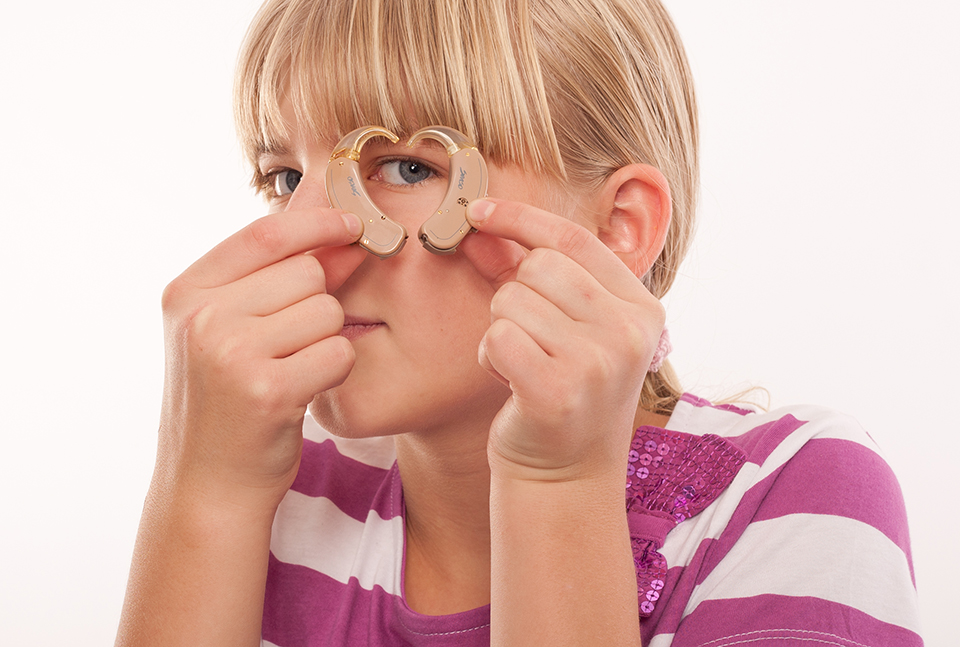 Everyone knows that hearing aids tend to look rather dull, after all, they are medical devices. While some companies provide a variety of colours, particularly for the kids, the majority offer a limited range, namely hair and skin tones. That’s fine for people who want to be discreet about their hearing loss. But what about the rest of us who have been wearing them for more than 20 or 30 years? We get bored, really quickly. Like myself, I discovered that it’s much more proactive to wear noticeable hearing aids to avoid awkward situations. Believe me, it’s not fun to have one person constantly repeat their sentences while the other keeps saying “I’m sorry, I can’t hear you.” Eventually one of us walks away feeling extremely frustrated or in tears and that’s not fun at all.

While I was college, brightly coloured hearing aids became available. I was beyond thrilled and immediately started wearing them. They became a big hit. I was suddenly popular for a good reason, my classmates and teachers wanted to learn more about hearing loss. That was a light bulb moment for me, it dawned on me that I should be using this opportunity to educate people about hearing aids. It was such a positive outcome that I continued to wear different colours every few years for a little bit of variety. It gave me such a great boost in my confidence, I was not as shy whenever someone approached me and started asking about my hearing aids. I found a great purpose in my life and became increasingly busy as a public speaker.

Then suddenly, I lost more of my hearing when I was exposed to toxic antibiotics, it changed to a profound loss in one ear, deafness in the other. Once I got over the shock of how much the world I knew changed overnight, I had to find new hearing aids. The ones I had were not strong enough anymore and I was missing a lot of speech. When I sat down with my audiologist, I was stunned to find out that there were a lot less options for me. One company in particular that had provided colourful super-powered BTE’s, stopped producing them. That meant switching to another brand which meant months of re-training my brain to recognize sounds all over again since every company sounds different. While it was difficult enough for me to deal with such a big change in my life, I was equally disheartened to discover that there was a severe lack of colour choices.

When I took a closer look at the companies that were offering hearing aids in the rainbow spectrum, I noticed that they were specifically for people with a mild or moderate hearing loss. I was furious when I realized that I was no longer considered to be a valued customer anymore, especially after wearing their products for more than 30 years. I was truly baffled at their lack of interest in producing powerful hearing aids in a wider range of colours for the severe to profound group.

Determined to find out why this was happening, I contacted several of those companies and got my answer: the bottom line was production cost. They wanted to focus on the short term market and obtain a quick profit from the baby boomers who lost their hearing in recent years.

It took me awhile to wrap my head around this since most people who pick a good quality hearing aid that suits their lifestyle, tend to stick with them for a long time. I would say that’s a great achievement in terms of snatching up a loyal customer. Unfortunately, that was not good enough for them.

In this case, after years of wearing shades of blue, red, and purple, I had no choice but to get a plain silver-toned hearing aid. I sighed when I first saw them. They made me feel old. Really, really old. I did not have grey hair so they really stuck out for the wrong reasons. It made me want to cry.

Then after awhile, I decided to do something about it. I grabbed some super glue and sparkling swarovski crystals and glued them on to the sides of my hearing aids. I began to feel a little better about them. More people noticed them and commented on them. One day, I noticed a forum about other hearing aids users who were doing the same thing I was. It wasn’t kids who were decorating their BTE’s, it was people of all ages who wanted to add some bling to their hearing aids. They were just like me!

They had lots of interesting ideas and showed me their elaborately decorated hearing aids. Some were using Wasabi tape on the sides of their hearing aids, others were using Jamberry Nail Wraps. I thought this was brilliant! Curious and inspired by their awesome creativity, I decided to try it out too. I went to eBay and managed to snag a full sheet of Jamberry Nail Wraps. A week after it arrived, I eagerly traced the outline of my hearing aid, trimmed it and carefully stuck it on. Needless to say, I was happier with wearing them and I’ve had many glowing comments about how they looked. Now, I can easily swap it out for a different design, say for the holidays or a night out on town. At least this way, I can co-ordinate my hearing aids with my wardrobe. 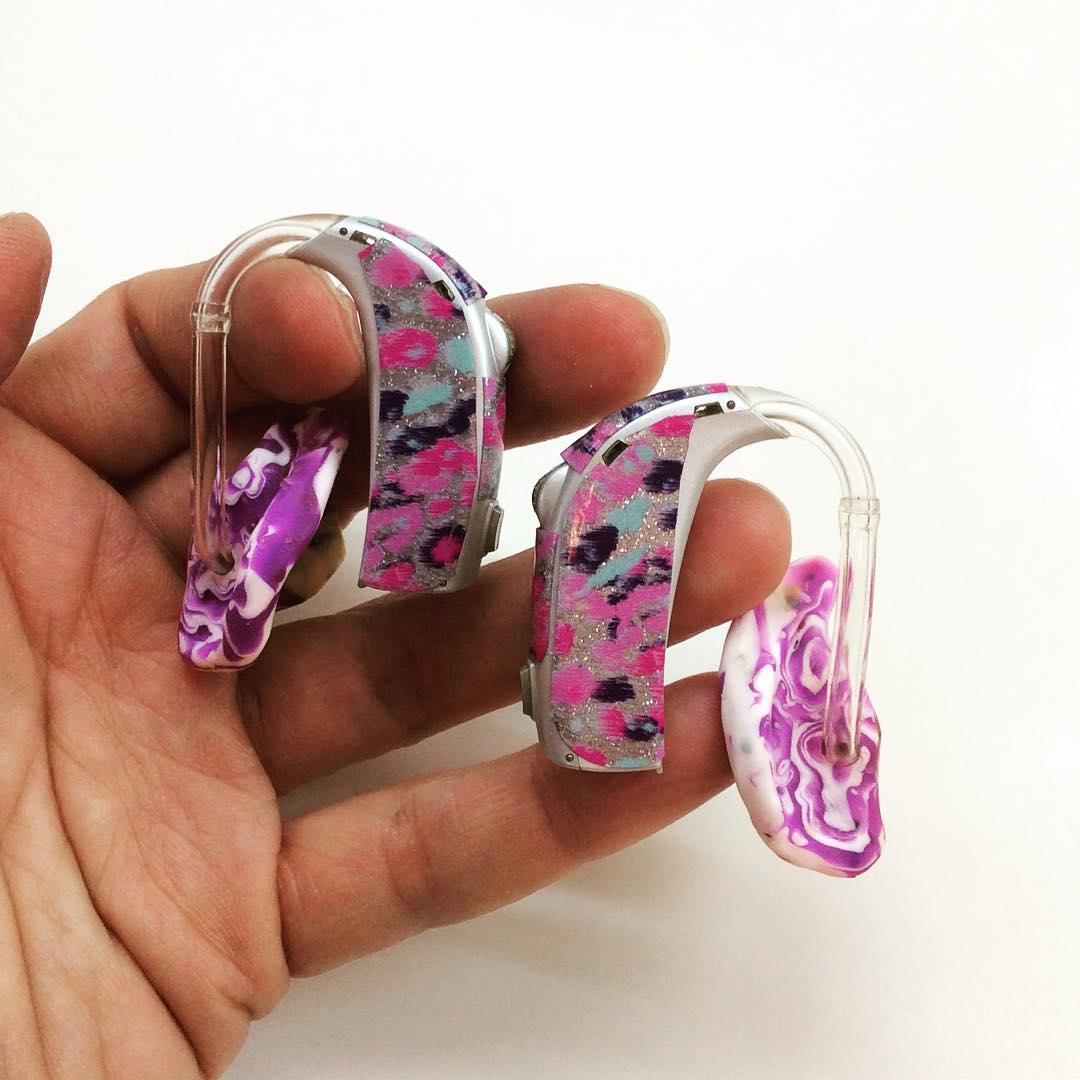 Then someone referred me to a website that made custom designed skins for virtually every product out there, including hearing aids and cochlear implants. My jaw nearly dropped. How did I miss this? So I followed their advice and checked it out.  I couldn’t believe what I was seeing, there were hundreds of delightful patterns, artwork, and vibrant colours.  You could even upload your own design! I was in sticker heaven.

If you’re interested in trying out their skins, here’s the link: http://phonak.skinit.com/phonak-devices.

Bear in mind that it’s limited to Phonak products such as the Phonak Sky V and Sky Q hearing aids, as well as Phoank’s Roger Focus, Roger Clip-On Mic, Touchscreen Mic and accessories. However, you can submit a request so that they can consider adding other hearing aid brands in the near future.

So, instead of being supremely bummed about wearing bland hearing aids, I decided to go forth and do something about it. I was not going to let a particular company define my personality. By finding other solutions, I was pleasantly surprised to discover that I was not alone in this. Which makes me wonder why more brands are not capitalizing on this incredible opportunity to allow people like me, long term customers, to customize their hearing aids.