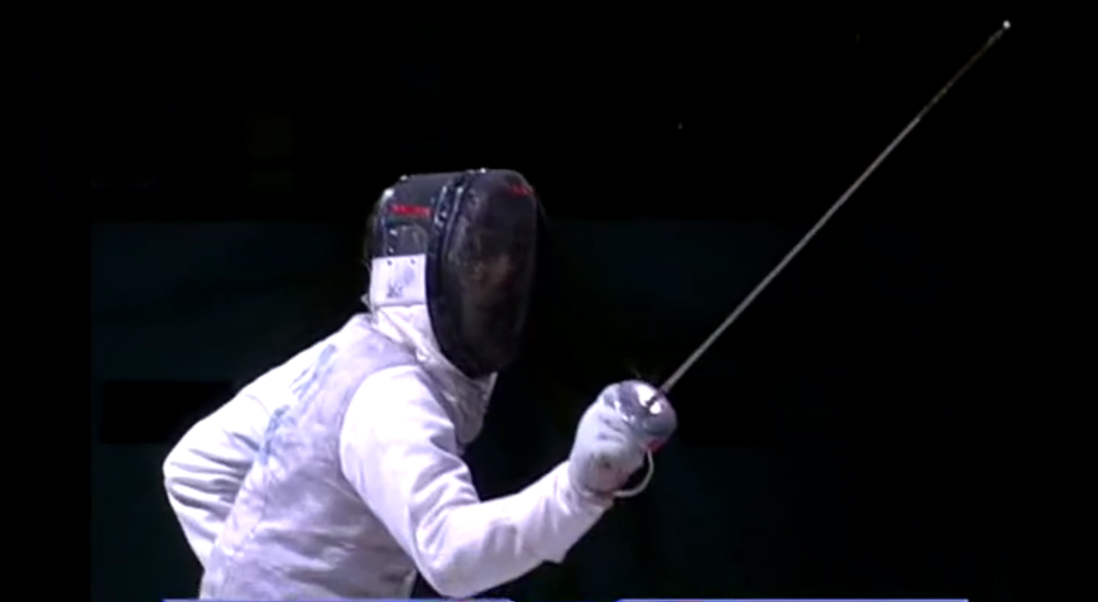 I’ve been asked if I’ve found the transition of going deaf from a profound hearing loss easier than becoming hearing impaired later in life from a normal hearing. Honestly? I really can’t answer that question because I was born with a severe to profound hearing loss. I have no idea what normal hearing sounds like. It was only in recent years that I went deaf in one ear from being exposed to toxic antibiotics.

However, what I can say is that growing up with a severe hearing loss has had it challenges and taught me a lot of hard lessons. It also showed me the truth about people very quickly and how they perceive disabilities in regards to how they treat me. I learned that it was essentially up to me to change their perceptions about hearing loss and educate others that anyone can become hard of hearing at any age. Trying to overcome a very old stigma was a daunting task especially when all I wanted to do was just be a normal kid.

Being the only one at school who wore hearing aids was not easy and in fact, it was extremely difficult. It was the same with sports, I was the only kid who wore hearing aids on the teams I’ve played on. At the time, in the 70‘s and 80‘s, most teachers and coaches were ill prepared to deal with someone like me. They lacked the proper training and understanding on how to teach to people with a disability, particularly hearing loss. It was essentially a whole new ball game for all of us.

From a very young age, I've had to be very forward about my hearing loss and inform the teachers or coaches that I couldn't hear them, particularly in large or noisy environments. Very few of them took the initiative to find alternative means of communicating with me such as using a clipboard or talking to me one on one. Instead, I had to rely on copying everyone else and simply following their actions without fully understanding why we were doing it. This meant it took a long time for me to grasp the rules.

The severity of my hearing loss meant that even with super powered hearing aids, I heard an average of 60% of what was spoken. Hearing aids only work at a distance of two metres or less - that's a very short range. Anything beyond that, such as across an open field or in large group situations, my ability to hear dropped to less than 40%. Back then, those types of hearing aids were analog which meant they simply amplified the sounds - they were very poor at picking up speech and this impacted my ability to hear and listen to the coaches. Spacious gyms and hockey rinks were the worst environments for me since sounds bounced and echoed everywhere. It was virtually impossible to hear my teammates, coaches and even the referees.

Over the years, I've had coaches and even teammates quickly assume that I wasn't "all that bright" or "a couple of fries short of a happy meal”. I was often ignored or regulated to playing a lot less than the other players. I’ve had my share of extremely rude and indifferent coaches and instructors. I really struggled to learn how to play sports and compete at the same level as the rest of the team. Times like this often made me feel incredibly isolated. This unfortunately had an enormous impact on my self confidence. It also made me realize that it was time to try a different approach.

Switching to martial arts and fencing proved to be a little bit easier since the focus was on myself as opposed to a team. All I had to worry about was my own achievements. It was still not an ideal training area since I was working in a gym with a group of athletes. It was loud, noisy and there was often music playing in the background. Then I discovered private lessons which helped me tremendously. While it was not easy, particularly with a boisterous group in the background training at the same time, it gave me a chance to concentrate and practice specific skills sets that I desperately needed. It was not a perfect solution but the best one available for the time being.

So what did going deaf mean for me? It had a surprising impact that I did not forsee. I became depressed and much more isolated as a result. To me, it felt like all those years of finding creative ways of  dealing with my hearing loss had changed overnight. I was suddenly regulated to feeling like a six year old on my own all over again in a strange, new environment. Aside from being terrified and extremely anxious all the time, I had to find new tools to succeed as an athlete. It also meant finding the right fencing club for me. The last few years have not been easy for me and in fact, it was a harrowing and daunting journey. It meant going home in tears, feeling very frustrated at being left out and essentially feeling like a failure.

Going deaf changed the way I could learn sports, my ability to hear dropped drastically since I was now relying on my “good” ear which meant hearing less than 40% of what was spoken. As soon as I put on my equipment, that percentage to hear dropped even more.  Pretending to hear what my coach said on the salle was not an option anymore. I had to actually understand what they were saying and apply what they taught us against my opponents. I discovered that I could no longer “fake it” by sticking to the basics. Since I was becoming a more experienced fencer, I had to truly assimilate more advanced skills and that proved to be a much more difficult task than I expected. I really struggled with this for the first time in many years. 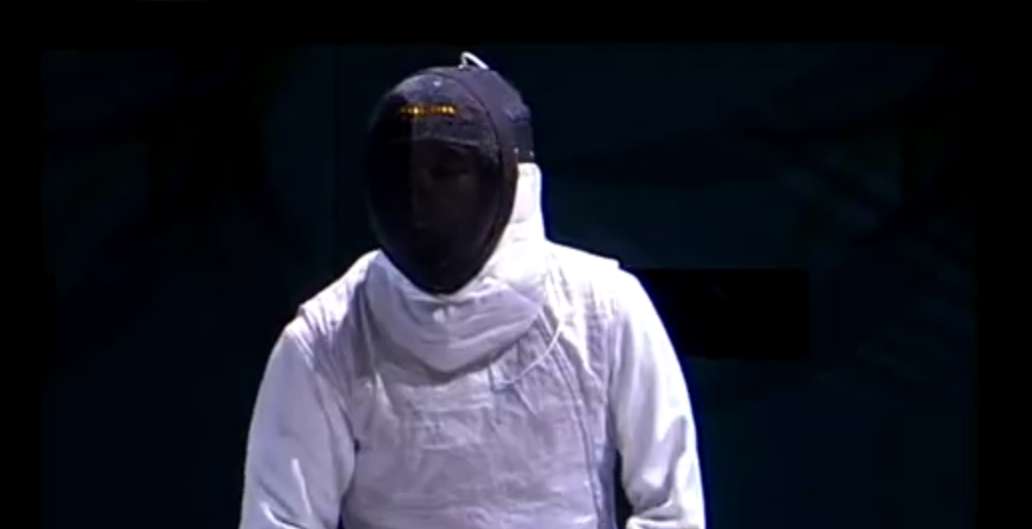 One issue is that some fencing calls rely on hearing the blades come in contact with each other which means I am unable to do that. Bear in mind that it’s also very difficult to see the fencers faces due to the tight metal weave of the mask. When they try to talk to me while wearing the mask, I actually hear very little.

I recently came across an article by a fencing instructor, Randall Ulrich, who identified a pressing need for bridging the gap in teaching fencing to Deaf athletes. This was a light bulb moment for me. For the longest time, I thought that I was a failure for not being able to keep up with my peers when in fact, it was the system that failed me. I couldn’t believe what I was reading. Not only did he discover that there was no formal system in the fencing community for teaching Deaf athletes, he created new visual signals for the fencers.

In his article, he covers many important points that resonated with me including the fact that wearing hearing aids in a fencing environment would be rendered useless due to the noise as well as the close fitting mask that covers the ears. I’m so glad he said this because I always thought it was my fault that I couldn’t hear the fencers and coaches when in fact it was due to the mask and gym. He does go on to say that the fencing instructors should find ways to minimize the ambient noises in the training area. Ulrich also makes a great suggestion by placing the scoring apparatus at the ends of the fencing strip as opposed at the mid point (parallel to the piste).

Overall, he states that the sport of fencing does not adequately accommodate Deaf athletes who want to learn this sport. In summation, he does say that teaching to Deaf students requires an adaptation of the existing methods by using visual cues/sign language, live demonstrations as well as utilizing other sources including handouts, captioned videos, and instructions written on a board.  I highly recommend watching some of his videos and reading his article about teaching fencing to Deaf athletes - it’s definitely worth it. 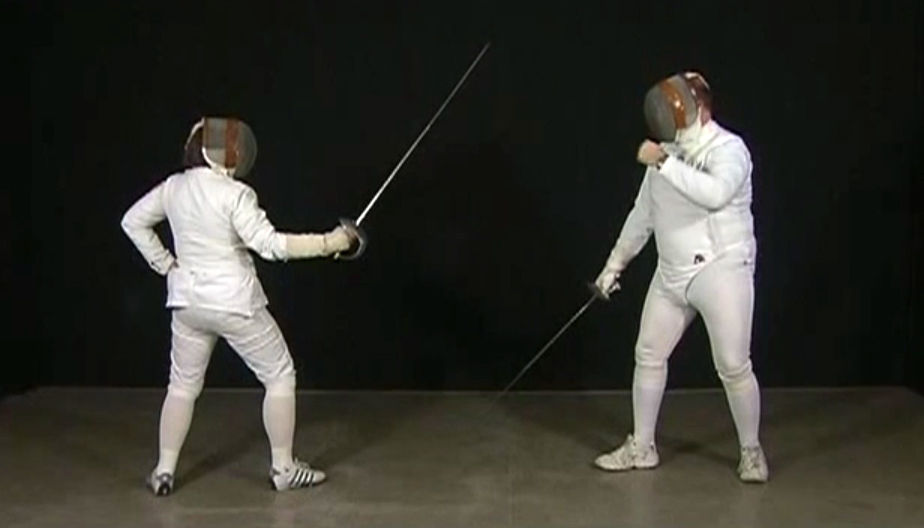 Here's a screen shot of Ulrich using hand signals with a deaf fencer.


You can read more about his publication here (You will need to purchase and download the full article from the International Journal of Sport and Society, Volume 3, Issue 4): http://ijr.cgpublisher.com/product/pub.191/prod.169