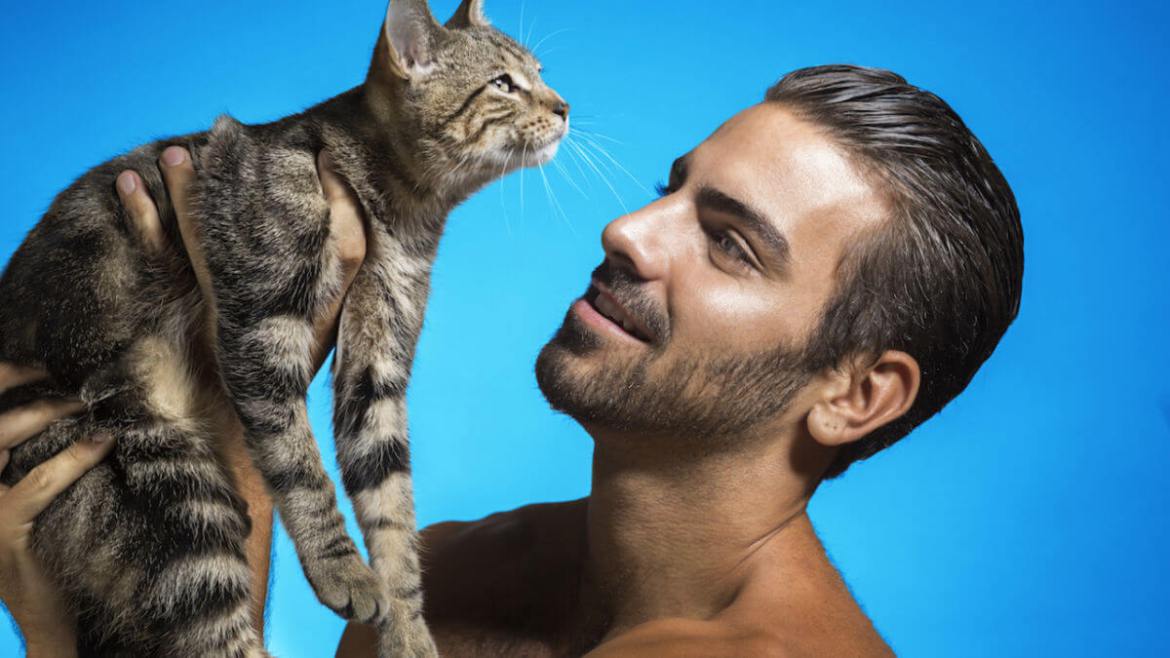 After a day of rain, the snow is finally melting. It’s a nice change to watch the fog rise in the air, and I can see the ground again, a sign that spring is on it’s way. I’ve grown tired of the huge mounds of snow on my driveway that were as tall as my small car. The amount of ice and snow we had this year was beyond ridiculous.

During a break this morning, I took a look at my social media feed and came across a trending, hot topic. Deaf model and dancer, Nyle DiMarco, tweeted about his latest experience at a movie theater. It was a well deserved rant about the lack of accessible resources for the Deaf and Hard of Hearing when it comes to being able to watch movies. He said that ten minutes into the film, he had to leave since his captioning device kept skipping dialogue (yes, this is a frequent and annoying occurrence - it happened to me yesterday while I was watching Maze Runner: Death Cure).

Apparently the movie theatre refused to give him a refund and instead, gave him two free tickets for future shows. This essentially defeats the purpose and misses the point entirely. His biggest gripe was that the overall experience made it very difficult for him to enjoy the movie and made him feel disabled. His is absolutely correct in that regard. 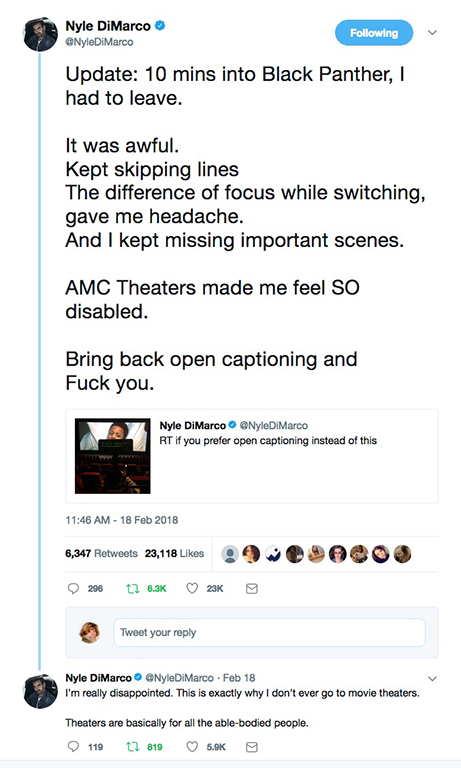 Since I live in a small town, I recently had to drive 45 minutes to see Maze Runner: Death Cure, since that was the closest theatre which provided captioning for that particular film. By the time I got there, I had to go to the busy kiosk and wait for someone to grab the Captiview from the manager's office, turn it on, set it for the right auditorium and hand it over to me. It was a large, clunky metal device with a long a bendable neck, that was longer than my arm. I could see the patrons staring at this strange, alien device in my hand. I heaved a heavy sigh, growing weary of those stares, and headed over to Starbucks. Then came the awkward moment when I had to set the captioning device down, grab my wallet, pay for the coffee and candy, and awkwardly juggle everything in my arms. The next biggest hurdle was trying to pull the ticket out of my purse and flick it toward the ticket agent, gingerly grab it as he handed it back to me, and head over to my seat. It was a royal pain as I stumbled in the darkness, trying to carry all of these items, slither into my seat, and fumble the device into the cup holder without spilling my coffee.

Luckily I managed to get it to fit snuggly in the cup holder without hitting myself in the face (yes, I’ve done that). Those devices are not exactly quiet, the bendy metal part creaks, really loudly, loud enough for everyone around me to crane their heads and watch me fiddle with it. There have been several occasions when I’ve had to hold the heavy metal for nearly two hours to stop it from tipping over. I’ve been asked, ironically, in a dark theatre, if I was vision impaired. Seriously? As someone who needs to see the face of someone in order to lip read, this was already a nightmarish experience for me and then having to deal with those kind of questions, really set my teeth on edge.

While I’m more than happy to show others how the captioning device works and explain why I need it, it’s aggravating to be singled out like that, over and over. Don’t get me wrong, I’m very grateful to be there, to have the opportunity to watch a movie that is captioned, but it’s getting ridiculous that I have to endure this kind of circus every  time. Before I even get into my car, I have to research online to determine which movies are captioned in nearby cities, most of which are typically nearly an hour away from me in any direction. Usually, the blockbuster movies, such as Star Wars, are rarely captioned when they are first released and I have to wait several weeks or the next month to view it. Or watch it late at night when they offer it at 10 pm, and end up driving through a sudden snowstorm after midnight. It’s a hassle. And I’m tired of it.

I've had humiliating experiences in the past where I've contacted the theatre ahead of time and inquired whether a movie would be captioned. They confirmed that it would be available on that day. So, I drove for over 45 minutes, purchased a ticket, only to discover that it was not captioned. Furious, I demanded to speak to the manager, showed him the confirmation message they sent me, and explained how far I came to be there. All they could do was give me a free ticket, instead of a refund. Overall, they had a dismal selection of films available for me to view on that day and I was not a happy camper. Ironically, there was a school for the Deaf nearby, so it didn't make any logical sense as to why they didn't provide very much in terms of captioned content on a regular basis.

There have also been times when I was told to hand over my driver's license in order to use the Captiview, and I found that to be one of the most horrifying and embarrassing situations I've been put through. Yes, I blasted them for doing that to me. It was wrong on so many levels. They claimed that it was to prevent theft of the devices. That made no sense to me. Why on earth would anyone take one home? Aside from being ugly and heavy, it would not have worked anywhere else. I never went back to those particular movie theatres since I found their attitude towards people like me rather inconsiderate and callous.

Nyle brought up a good point that being forced to used glitchy and awkward devices in theatres, feels very dehumanizing. He could not enjoy the film like everyone else, and it made him feel disabled. He’s right about this, I feel it every time I go to a movie or a play.

I’ve learned a long time ago to memorize plays whenever I could since I’ve had theatres offer to give me a script and flashlight on the night of the show. Really? You want me to look down at the pages in the dark, thereby missing the play in it’s entirety, and  annoy the hell out of the people around me? Um, no. What’s wrong with you people?

I really do empathize with Nyle since I’ve experienced it so many times myself and grown incredibly frustrated from it. I deal with it every single day. I don’t like being reminded that I am deaf because I fail to hear people all the time. What most people don’t realize is that not only do I have to strain to listen, I have to take a moment to process it, literally through my hearing aids, and react appropriately. Most of the time, I’m lucky enough that I can provide the right answer. When I say or do the wrong thing, I fail spectacularly and have nightmares about it. Seriously, I do. It’s like having a bucket of ice cold water dumped over my head when I realize how stupid I sounded.

Nyle is correct that when we are not able to participate in social events, it sets us apart, which makes us feel disabled. We are essentially rudely cast aside, as if we didn't matter. We struggle on a daily basis, constantly swimming against an impossible current just to stay afloat, and when we fail, we quickly sink to the depths of despair. It’s hard to rise above that.

I’m feeling more of that sensation these days as I search for jobs and a new place to live on my paltry income. I’ve been looking for over six months  and haven’t received any tangible leads. It’s a vicious circle of not being able to get an apartment without a job, and vice versa. For someone like me, it can have a debilitating effect on my ability to stay focused and strong. I can feel the walls of my foundation starting to crumble. In some ways, my hearing loss is my kryptonite, where it can make me feel powerless. It eats at my soul, and makes me wonder what I’m meant to do with my life.

Like Nyle said, it’s a painful reminder when our disabilities prevent us from fitting in like everyone else. It’s a rude awakening, especially when we think we got it cornered, learned every trick in the book, and still fail big time. I’m not necessarily angry, especially at the lack of resources available to me, I feel defeated.

I’m glad that Nyle is doing something about this by posting his rant to millions of his followers and educating the public about what we go through on a daily basis. It’s about damn time that someone had the guts to say it. Thank you Nyle. Because I’m tired of it.