Time seems to slow down as you read Shattered Lies, you could almost feel the intense Mississippi heat and southern charm. Her words flow effortlessly across the page, pulling you deeper into gripping tale that is full of hidden secrets. The pages come to life, revealing the dark truth about the past. This book is beautifully written featuring eloquent words. You could literally feel the rich history seeping through.

Is this your debut novel S.J.?

The overall story is quite emotional and deeply invested in the family’s dark secret that threaten to tear apart Kate’s life. Interestingly, this reminded me of the Divine Secrets of the Ya Ya Sisterhood. What inspired you to write this novel?

Easy to answer. Life. The world around me. This family spoke to me. I had no choice. I had to write this story. No more so than when I moved to Mississippi. That is when the story really evolved. After considering several states where to set Shattered Lies over the years, Mississippi was the place to set it. There was no other place. I saw the book come alive.

How long did it take to write this story?

The idea came to me in July of 1999.Then it went into hibernation until I moved to Mississippi, and then, it just came to life. If memory serves me correctly, it took just two months to write including editing.

Will you be writing a sequel?

Thank you for asking. Yes, I’m proud to say that a sequel is already in the works. I already have a draft on my computer waiting to be brought to life.

A portion of sales, 10% of it will be donated to the Polycystic Kidney Foundation (www.pkdcure.org) - why is this important to you?

Poly Cystic Kidney disease is an insidious disease that affects both child and adults. It takes too many lives. Babies are born and doomed with it. I also found out that it runs in my family, which makes it a cause close to home.

You are also devoted to helping animals and being an active voice for them, what prompted your interest in this aspect?

That’s a very good question and I have no idea. I’m an animal lover as far back as I can remember. I’ve always had pets. You name it and I probably had it. I remember when I was four my father brought home a large paper towel box. Inside the box was a small solid black puppy and I fell in love instantly with her. She was my best friend. I don’t remember never having a pet. As far as I’m concerned, animals are the only pure innocence that exists in our life. They don’t have a voice, but we do. Even as a child, I always spoke up for and about animals. I’m one for the animals. I even created a blog just for them to bring awareness about animals, rescues and more:  http:onefortheanimals.blogspot.com

Since animals are a big part of your life, are there any charities that you recommend?

On my: that’s a loaded question. There are many charities I support and can recommend.  All of the charities I support help animals in one way or another. I support ASPCA, The Humane Society of the US, and Animal Legal Defense Fund because they are large and can make an impact.  I also support and can recommend smaller lesser known ones because they matter to me, too:  Petfinder, Soi Dog Foundation, Alley Cat Allies, Beagle Freedom Project, Farm Sanctuary, Red Lake Rosie’s Rescue, Rescue Tails Animal Sanctuary, Mission K9 Rescue, Peaceful Valley Donkey Rescue, and Vest N PDP, which raises funds to supply bullet proof vests to K9s. I also support a smaller newer charity in Yazoo County, MS called Southern Tails Animal Rescue, which I just learned about just over a year ago. This small charity run by one woman takes in abandoned animals in Yazoo County where Shattered Lies takes place, and where unfortunately, many people don’t like to spay or neuter their animals. Instead, they abandon them, discarding them like trash near dumpsters and such. Animals aren’t trash and shouldn’t be treated as such.

Your main character, Kate, is a vet, do you have any personal experiences in this field that helped contribute to the story?

I once wanted to be a veterinarian. I even studied in high school to become one and took classes in college. All the math and science pushed me away. The character picked her profession, but I can’t say I didn’t influence her with it. It just seemed the obvious profession for Kate Thayer.

Shattered Lies takes place in Mississippi, did you grow up there?

Nope. Not at all. Actually, I grew up far away from Mississippi in New York City. I lived and traveled to many places, but Mississippi was the only place that Shattered Lies came to life. I like to say that I was born a Yankee, but I’ve always had the heart and soul of a Rebel.

This novel does feature some racism which is not an easy subject to talk about, what made you decide to include it in the story?

Art is imitation of life. Art is life. Life is art. Books are about life. Shattered Lies is a reflection of life around us. Racism wasn’t meant to be the subject of the book. It evolved from the story. It was a story that needed to be told and no more time than the present and the Thayer and Johnson families told it.

Many writers will often incorporate true experiences into their writing, were you able to do this?

I could say that I did, but no. Shattered Lies is purely fictional, though I won’t say that composites of real people and places weren’t used.

Your writing is visually rich, did your background as an executive producer for television help with this?

Evidently so, but I’ve always been an imaginative person. Whether it was television or writing, I let my imagination soar.

You have an extensive list of skills from being a licensed pilot, military veteran, as well as being a University professor. I would love to know what subject you taught.

Actually, I still teach: English, Media Communications, and Law, though a year ago I was promoted to head the English Department at my University. I still lecture, though now most of my time is in meetings.

Are there any particular scenes or chapters that are truly special to you?

Um…I have to think on this one. So many scenes and chapters in Shattered Lies touched me. Truly special? I think I have to say the one in which Kate and her Uncle Sam are on the train and she tells him about her grandfather Jackson and his treatment of her when she was a young girl. That was heartbreaking.

Did you have a particular field of interest in the military?

Search and Rescue. I was a rescue swimmer.

One of the characters in the story is a military veteran who served in Afghanistan who sustained an injury to his leg, is this a reflection of your life?

No again. Purely fiction, though after writing about this character, I soon discovered a real person somewhat like him, but no it wasn’t a reflection of my life, though it is a reflection of all the Veterans ever injured in Afghanistan and Iraq and more. Veterans are often overlooked and I wanted show they are all around us.

The focus of your story involves working on a farm, did you grow up in this kind of environment?

Oh no. Not me. There aren’t many farms in New York City, but I did get to spend a summer on one in Upstate New York. In Mississippi now, I’m surrounded by farms.

Writing a story is never easy and often involves research, were there any topics that required you to learn more about?

I’m a versatile person and have done many things; been to many places; seen many things, but yes, I still had to do research. Lots of research for Shattered Lies, but not one special topic, no. I believe no one ever stops learning and in writing it is very true.

Have you written other stories?

Yes, I have over three hundred published stories, articles and interviews since I sold my first short story over three decades ago. I’ve also written scripts for television.

How would you describe your personality?

The eternal optimist yet, a realist at the same time. If life closes a door, be careful when you open the window, but do open it.

Do you have any advice for new authors?

Never quit. Keep writing. As long as you write something, you are a writer. The greatest failure is the fear of trying anything new because you fear failure. Nothing ventured. Nothing gained. The belated novelist Jackie Collins gave me the best advice ever, “Keep your writing passion at the fore!” Never let anything distract you from writing. 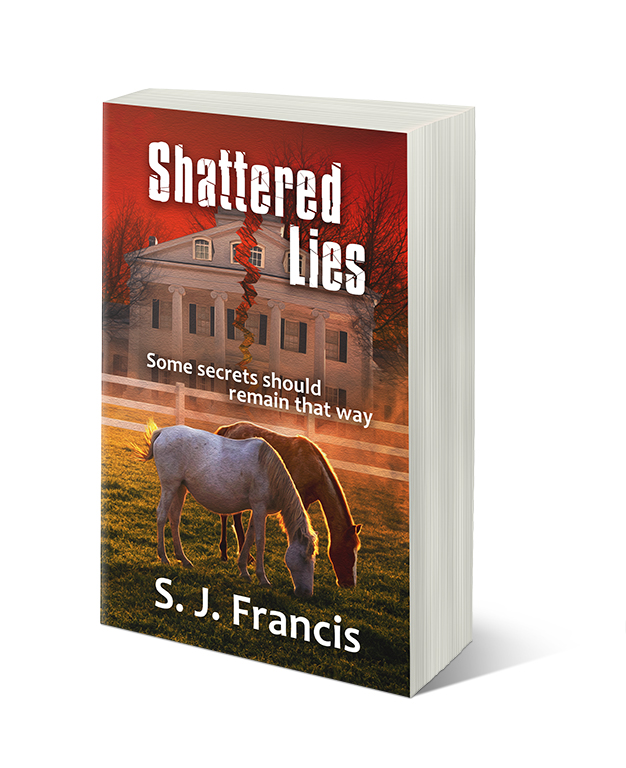